FROM THE HISTORY OF PITIRIM SOROKIN SYKTYVKAR STATE UNIVERSITY 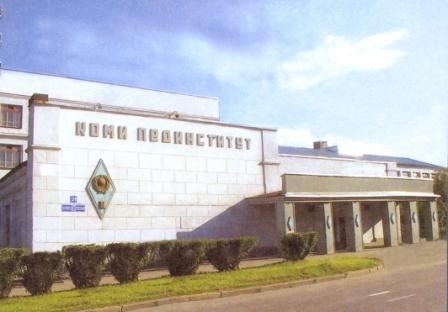 The Komi State Pedagogical Institute was established on the basis of a decree of the Council of People’s Commissars of the RSFSR on November 18, 1931; On November 1, 1931, Order No. 1 of the KSPI, A.F. Bogdanov, proceeded to organize the university. The grand opening took place on February 21, 1932: 12 teachers, 127 students; departments: socio-literary, physico-technical, chemical and biological. In 1934, a biennial Teacher’s Institute for the preparation of teachers of incomplete secondary schools was established (closed in 1954). In 1936, an open correspondence department was open, there were four faculties: historical, language and literature (philological), physical and mathematical, natural science; the first educational building was built in 1938 (architect I.A. Minin), before that the State Pedagogical Institute was housed for six months in a building at the corner of Sovetskaya Pushkin, then in the building of the former Theological School; in 1965 the second building was built. Since 1932, about 30 thousand specialists have been trained: more than 1,200 honored teachers, excellent students of education; over 600 graduates were awarded orders and medals; In 1981, for achievements in training, KSPI was awarded the Order of the Badge of Honor. By 2011, the following faculties functioned: Physics and Mathematics with the departments: Mathematical Analysis, Algebra and Geometry, Physics, Informatics and Computing; geographical and biological: botany, zoology, anatomy and physiology, geography; philological: Russian and Komi languages, literature, cultural studies; foreign languages: English, German, French; technology and entrepreneurship: engineering, methods of teaching technology and entrepreneurship, automation and microprocessor technology; pedagogy and methods of primary education: pedagogy and methods of preschool education, developmental psychology, pedagogy and methods of primary education, methods of teaching Russian and Komi languages; additional professional education; additional teaching professions; general institute departments: history and economic theory, philosophy, sociology and political science, pedagogy, general psychology, foreign languages, physical education; in full-time and part-time departments – 3.9 thousand students, 26 graduate students. Educational and material base: three educational buildings, a dining room for 400 seats, five hostels, training workshops, 13 computer classes, a satellite television system, an intrauniversity information network, the Internet, a library, a publishing center, a botanical garden, a biological station (m. Kochchoy- Yag), KGPI history museum, a large sports and fitness halls, a ski base, summer sports grounds, two assembly halls. In 1991, the Komi Republican Internally-Correspondence Lyceum Boarding School for gifted children from rural areas was established at KSPI (more than 500 students in grades 9-11); in 2014 KGPI is attached to SSU.

In 1973, in order to improve the management of the educational process, the Faculty of Natural Sciences was divided into three: physical and mathematical, chemical and biological, and economical; in 1977, historical and philological — into two: philological and historical faculties; in 1994, physical and mathematical mathematical and physical, in 2000 – economics at the faculty of management and finance and economics. New faculties appeared: legal (1993), Finno-Ugric (1994), physical culture and sports (1996), psychology and social work (1998), faculty of arts (2000), and lyceum (1992), college of economics and law ( 2000), college of computer science and computing (2004), Vorkuta branch of SSU (2005). In 2011, on the basis of the faculties, institutes began to be created.

The first rector of the University of Syktyvkar was appointed a prominent scientist in the field of the economy of the North, Doctor of Geographical Sciences, Professor Valentina Vityazeva (1919-2010). She headed the university for 15 years and was in those years the only female rector of the university in the USSR. In 1987, the rector was Doctor of Physical and Mathematical Sciences, Professor Alexey Grishchenko (1937-2011), in 1990 he was elected to this position Doctor of Physical and Mathematical Sciences, Professor Sergey Ivanovich Khudyaev (1934-2004). In 1995-2012, the university was headed by Doctor of Economic Sciences, Professor Vasily Zadorozhny. From November 6, 2012 and. rector, and since February 20, 2013, the candidate of law Marina Istihovskaya was appointed as rector; Natalia Mikhalchenkova, Candidate of Economic Sciences, took the Rector’s position; from November 3, 2016, Acting Rector – Olga Sotnikova, Doctor of Pedagogical Sciences.In the first academic year, two faculties were opened as part of the university: the historical-philological and natural sciences, and more than 40 teachers worked in nine departments. The main personnel suppliers were the Komi branch of the USSR Academy of Sciences (now the Komi Scientific Center, Ural Branch of the Russian Academy of Sciences), the Leningrad (St. Petersburg), Moscow, Perm State Universities and the Komi State Pedagogical Institute, with more than 1/3 of the teachers sent from Leningrad State University. In 1972, 350 students were accepted in 8 specialties (mathematics, physics, chemistry, biology, history, Russian language and literature, Komi language and literature, industry planning).

On February 14, 2013, the Komi State Pedagogical Institute was attached to the university (opened on February 21, 1932). 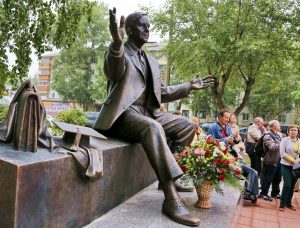 On August 22, 2014, a monument to the eminent sociologist Pitirim Aleksandrovich Sorokin (1889-1968; sculptor A. Kovalchuk) was erected near the main building of SSU. 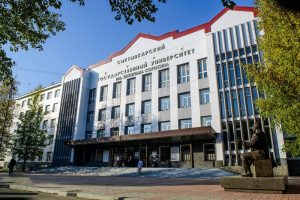 Currently part of the SSU them. Pitirim Sorokin has the following institutes: Humanities, Natural Sciences, Foreign Languages, History and Law, Culture and Arts, Medical, Management and Entrepreneurship, Pedagogy and Psychology, Social Technologies, Exact Sciences and Information Technologies, Economics and Finance, Legal, and also individual educational programs, continuing education. The structure of the university also includes the College of Economics, Law and Informatics, the Museum of the History of Enlightenment of the Komi Region, the Museum of Archeology and Ethnography, the Zoological Museum, the Museum of the History of Komi Pedagogical Institute, the virtual branch of the Russian Museum, the Botanical Garden, a biostation, a center of artistic creativity, a sanatorium and preventorium, swimming swimming pool, gyms, ski base. Since 1991, the Komi Republican face has been operating at SSU. The university has three levels of education: graduate, undergraduate, specialty. Teaching work is carried out by highly qualified teachers, doctors and candidates of science.

Based on the materials of Maya Burlykina

Our support available to help you 24 hours a day, seven days a week.